Get fresh music recommendations delivered to your inbox every Friday.
We've updated our Terms of Use. You can review the changes here.

by Party of the Sun 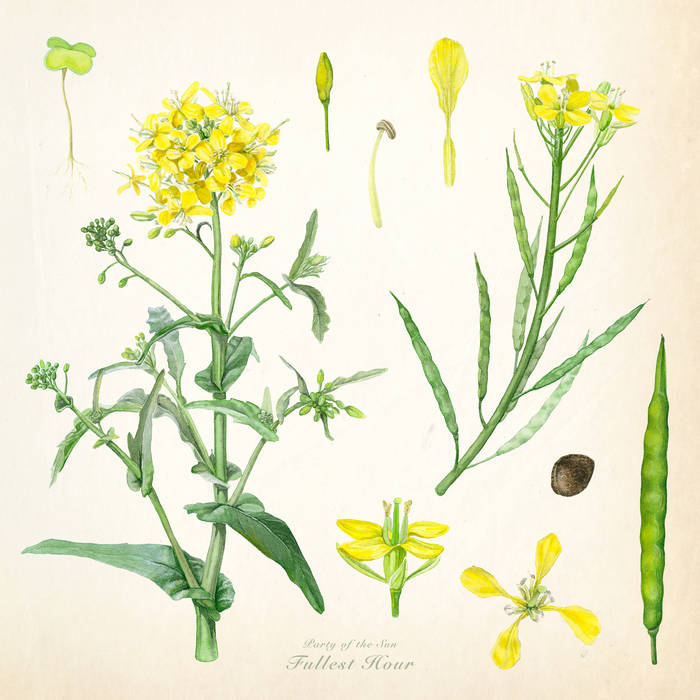 walkerpogue What a record. Its hard to capture that luminous lens flare sound and do it this well.

K Hall This is a beautiful, delicate album and every song is equally delicious. My favourite tune? Can't pick right now, ask me next week....

Trailing Twelve Records presents Fullest Hour: the second full-length album from New Hampshire-based outfit Party of the Sun set for release on September 3rd. A follow-up to their debut album Trekker and subsequent Goldenwood EP, Fullest Hour finds Party of the Sun merging climatic variations into musings on connectedness, nature, and fatherhood. The result is a delicate mingling of experimental Americana, psychedelic folk, and organic ambiance.

Since their inception, Party of the Sun has been a collaborative project led by songwriter Ethan McBrien and producer/multi-instrumentalist Rory Hurley. Throughout their discography, the duo has tapped various collaborators to add their textural expertise as needed. Party of the Sun’s current iteration welcomes drummer and percussionist Garrett Cameron.

With the majority of their previous albums written on a sheep farm, a close relationship with nature continues to be central to the band. Taking a new approach to writing, McBrien and Hurley penned the songs we hear on Fullest Hour while on long walks in the crisp evening air of New England’s autumnal months. The duo began recording the album in late 2020 with a minimalist vision of using primarily guitar, mandolin and woodblock. Additional tinkering led to the recruitment of Cameron and the expansion to full drums, various keyboards, banjo, and vibraphone.

Fullest Hour finds itself as a continuation of Party of the Sun’s organic sound, however more expansive, mature, and vulnerable. The sun-filled introduction of “Bottomless” sets shape to the fleeting and heartfelt tone throughout the album. You can hear an earnestness and care in McBrien’s voice, a soon-to-be father at the time of writing, as he sings “[we’re gonna catch you kid / ain’t gonna let you hit the bottom].” The adventurous and undulating “Brassicas” finds the band playing with texture and space to help illustrate the lyrical commentary on the intersection of nature and industry.

Ephemeral ambient interludes “Trekker,” “Ursidae,” and “Marcescence'' act as moments of meditation tying together the album’s overarching narrative of connectedness. Longer form entries such as “Idle Bend” and “Weight of Age” exemplify the trio’s ability to seamlessly maintain tone while seamlessly shifting tempo and time signatures. The album’s final moments take place within “Highline,” a dreamy and melancholy ballad on how we shape and are shaped by our surrounding conditions - how shedding the illusion of separateness is the work of being human.

In title, Fullest Hour is an allusion to the ephemeral beauty of nature. McBrien explains that “songs can be a lot like flowers in their hour of elegance.” There is an innate desire to make beauty last, to hold onto it, but perhaps impermanence is central to beauty. Fullest Hour distills the feeling of fleeting beauty into thirty minutes of wistful, emotional, and thought-provoking compositions.

Recorded at the base of Kidder Hill in Marlborough, New Hampshire
Mixed & Mastered by Rory Hurley

Party of the Sun New Hampshire

Party of the Sun is a psychedelic folk band from New Hampshire, comprised of Ethan McBrien, Rory Hurley, and Garrett Cameron.

Bandcamp Daily  your guide to the world of Bandcamp